My compositions are involved with the systematic exploration of scaling the multidimensional phase space that results from a desynchronization of one or more elements involved in sound production. The outputs often feature nonlinear phenomena (extra-complex sonorities) in which all attractor states (classes of sounds) are obtained through bifurcations (changes between classes) in any direction. These procedures utilize topological inquiry focused, by default, on little traveled regions of the total sonic map. It is important to recognize that such multidimensional networks do not just focus on articulation, such as is dominant with most other composers who utilize multidimensional networks. Rather, it utilizes all structural components of the mechanical system: Power, Source, Resonance & Articulation and how desynchronization will affect a meaningful (perceptible) sound difference from ordinario. 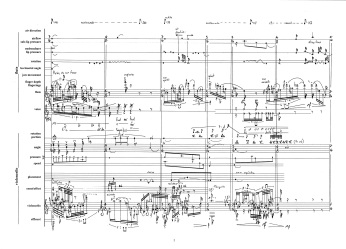 These procedures will impact the perception of consonance v dissonance  as well as the musical tension of an audio output, and may be utilized as intelligent generative procedures.

Published work that specifically discusses such ideas can be found in the following: